Lakes in a Day: Suzy Whatmough 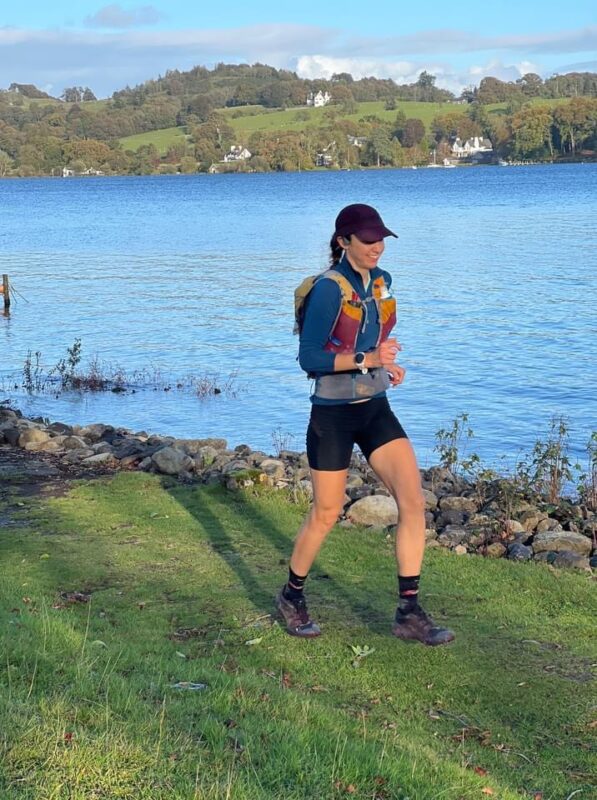 I particularly loved the route – the combination of going over the fells, different terrain, including some exciting steep downs and bog, and then skirting around Lake Windermere. It was a great way to see the Lake District on two feet.”

I enjoy running all kinds of distances, including longer trail distances. This was my first long distance run in the Lake District, but I’ve done up to 100km in other locations.

My friends did LIAD last year and recommended it. I really enjoy running in the Lake District, and I liked the idea of crossing it in one go from north to south. I particularly loved the route – the combination of going over the fells, different terrain, including some exciting steep downs and bog, and then skirting around Lake Windermere. It was a great way to see the Lake District on two feet.

Hall’s Fell Ridge is a good scramble down from Blencathra, with great views. The volunteers were really helpfully stationed down that section, helping people to find the route down and making sure everyone was ok. In fact, the volunteers were brilliant throughout – they’re really friendly and helpful, and the feed stations were really well stocked.

I found Durty Events were very well organised and thoughtful. They made it as easy as possible to just run. I really appreciated them putting on camping and coaches, making it more accessible for those travelling further afield and without external support. I liked that they provided a range of food options, and detailed these in advance, including vegan options. They were excellent at communicating details about the event and what we could expect as participants.

LIAD gets tough towards the end, when you’re tired. It looks like the second half is flat, but it’s actually quite undulating still. It’s just flat in comparison to the first half! But I had lots of lovely chats throughout the race with other competitors – people tend to be really friendly at these sorts of events.

If anyone is thinking about doing Lakes in a Day and it appeals to you, then go for it. The cut offs are very generous, so it’s accessible to lots of people, including people preferring to walk most, if not all of it. If you do enter, I’d recommend getting some practice on the fells if possible, to be more familiar with the terrain. If that’s not possible, just try to cover lots of hills in training, and practice wearing your kit and fuelling yourself on a long day out. I had done a few other hilly trail events beforehand, so for me LIAD was just a continuation of that – trying to get some hills and distance in.

On race day make sure your food and drink is accessible without having to take your pack off. This helps to make it as easy as possible to keep eating and drinking as you go, which is really important to help get you to the end. I ate normally the day before, and had oats in the morning. I don’t tend to over-eat beforehand because I don’t want to feel too full. I just kept eating throughout the race.